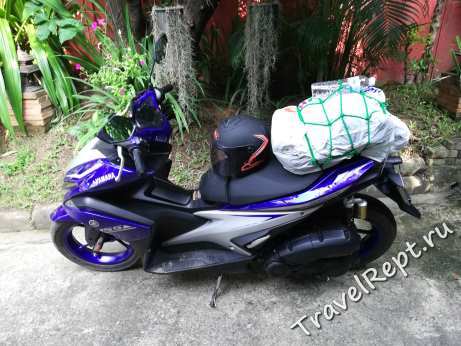 In the morning, I collected 2 backpacks: one – a small, “tactical” backpack, with which it is convenient to wander through interesting places, put everything valuable and electronics into it. In the second, a large backpack packed all other things, including stitching and cutting ones, and wrapped it with plastic wrap – this one will go into the luggage. After breakfast, I headed to the bus station, from which buses leave for Suvarnabhumi Airport. This station is located at the crossroads of Tappraya and Teprasit, near the Food Mart supermarket (see map at the bottom of the post).

At the station I bought a ticket for an 11-hour bus – 120 ฿, ran into Food Mart, found kefir there! I could not resist, I bought – 50 ฿. They learned to make good kefir, almost like in Russia. He drank kefir, smoked and at 11 o’clock he set off to the airport by bus.

Arrived at the airport at 12:45. The first thing I went to check in, checked in my luggage and, already lightly, went to lunch. On the 1st floor of the airport, near the 8th exit, where buses leave for Pattaya, there is a Thai food court. Cheap and tasty. Just watch it. There is cheap but absolutely tasteless soy based food. As in all food courts here, payment is not in cash, but in coupons. First, you need to exchange money for coupons near the entrance, and then pay with sellers with these coupons. If you stay coupons – do not forget to exchange back for money. I took a stew of pork with vegetables and rice – 70 ฿. 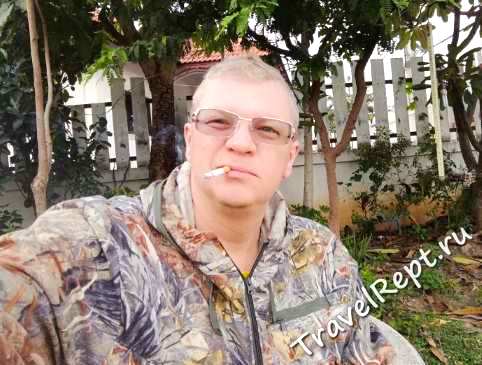 After lunch, I went looking for my gate for landing. At Suvarnabhumi Airport, for local airlines these are gates A. As you enter the airport building from the bus – go straight to the leftmost corner of the airport – there is a local airline control zone there. If international flights depart from the top floor, then here you need to go down on the contrary. He quickly went through the inspection area, found his Gate A3A and, wandering around the sector, regretted that there were no smoking areas. Sorry.

Departure at 14:20. They quickly plunged into the plane, but the departure was delayed. Some technical problems. Waiting for departure, I fell asleep. I just arrived from Siberia yesterday, I haven’t rested from that road, and then again to fly!

I woke up about 16 hours. We stand on the ground. Damn it! The fact is that I planned to rent a bike at Cat Motors today, spend the night, and early in the morning, at 6-7 in the morning, leave for Chom Thong, where I planned to stay for the next 2 days. I calculated the flight time – an hour and a half, then get my luggage and get to Cat Motors, I can’t get to the northern gate of the old city of Chiang Mai until 18 o’clock. And at 18 o’clock Cat Motors closes. And I can stay without a bike for the night, and rent only in the morning. And this is a delay in promotion! Cat Motors opens only at 8 in the morning (this is according to Google, and when they really open it is not known), while the design, etc., will be put forward only after 9 hours. And this is in the best course of events. And this is extremely undesirable. 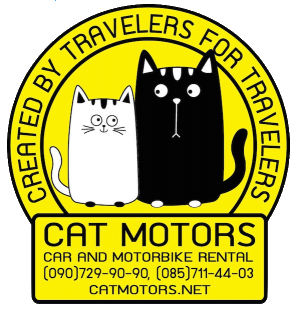 And then I remembered that somehow with Konstantin Zhivenkov, the owner of Cat Motors, they exchanged a couple of phrases in the Facebook messenger. That is, the connection is established. I look in the smartphone – Konstantin on-line. I wrote that Yamaha Aerox is really needed for 5 days, but my plane is delayed, please stay a little longer and not close the rental.

But then the flight attendants gave the command to buckle up, the plane went on take-off and, finally, we went on a flight to the glorious city of Chiang Mai. In the former capital of the ancient Lannatai, I arrived at 17:20. Got luggage and quickly in a taxi. Unsubscribed to Zhivenkov that I was already approaching.

Immediately at the exit from the arrivals area, on the left is a taxi service. They drive to any Chiang Mai hotel for a fixed fee of 150 ฿. You say where to go, they give you a ticket, pass it to the taxi driver and go. Cash payment to a taxi driver. So, usually, the farangs arriving in Chiang Mai immediately go, of course, to the hotel. I indicated the destination – North Gate, Kat Motors, rented a motorbike. They looked at me as strange, asked several times, and the taxi driver also said several times that it’s not a hotel, namely, to rent a bike … He showed the taxi driver a google map several times, he finally calmed down. Found Cat Motors quickly. At the beginning of the seventh evening we arrived at their destination. Thais, car rental workers, were already waiting for me. The bike was ready. Quickly took shape and handed me the bike. The bike was worth 500 ฿ per day. I got a discount of 100 ฿. 5 x 500 = 2500 – 100 (discount) = 2,400 ฿. Also took a deposit (security deposit) – 3 000 ฿. This is a guarantee of payment for damage. If all goes well, I will return the bike safe and sound, then the deposit will be returned. Therefore, I do not include a deposit for a bike in expense items. But be sure to consider when calculating your budget.

Looking ahead, I want to say that the Yamaha Aerox is the best CVT I’ve ever driven. Engine – 155 cm³, high landing (which is not unimportant with my height), there is almost no feeling that you are riding a “stool”. Even in comparison with the most popular “farangbike” in Thailand – Honda PCX, Aerox is much more convenient. The PCX is shorter, taller, and more like a leaner than a lean and athletic Aerox.

If you drive a car, you can rent it directly at the airport. The rental price also includes: local taxes, damage insurance, theft insurance, third party liability insurance, airport tax.

Everything seems to be fine, I’m on wheels, but it’s already dark and I should look for an overnight stay. I searched in advance for possible overnight options on the Internet and saved the GPS coordinates on my phone. I didn’t reserve a room, I thought – I’ll come to my place, look and settle down, there will definitely be free rooms. I decided to go for the night closer to the exit from the city, behind the “square”, in the southeast of Chiang Mai, in the Art in Paradise area. Went … Tortured to wander through the dark and tangled unfamiliar streets of Chiang Mai, even with a navigator on your smartphone. I found it as one prepared option, but there was only an empty dormitory free (a common room with two-story bunks), where I would spend the night alone, for 100 ฿ and a separate room with 2 single beds for 300. But I did not like it. I refused. The Thai guy said that on the same street, there is still a hostel, go there. But I thought that there was probably something like that. And I didn’t like the area, there was no infrastructure: there were no shops and cafes.

And I decided to go closer to the airport, to leave the city, to the highway number 108 – there were prepared options. So that in the morning the city does not spin, but immediately leave. Drove to Baan Bua Kum Guest House. The rooms cost 500 ฿. Several houses were free. True with own shower / toilet, air conditioning. I’m already so tired, I didn’t want to go anywhere anymore and, I think, to hell with him, I’ll spend the night here. But such a shack is two by two meters, for 500 ฿ …

Threw things in the room and went to eat and buy for breakfast. Nearby was CentralPlaza Chiangmai Airport. At first I wanted to wrap it there, have dinner. But he abandoned this idea, there was absolutely no desire to lug around the mall. I took advantage of 7/11 and a cafe near the guesthouse.

I bought in 7/11 water, noodles, bread and sausages (100 ฿) – in the morning, for breakfast. For dinner, I took pad thai (fried rice noodles with vegetables and pork) in a Thai cafe and meat soup – all for 80 ฿. Brewed tea (tied from Russia) and dined. The soup was nothing, but Pad Thai was extremely disgusting. I don’t like him anyway, but there was nothing else, and then they still fried on some disgusting fat, more … I ate half, didn’t climb further, threw it away.

In anticipation of the upcoming trip, he could not sleep at all. Constantly went out to smoke (no smoking in the room!). I met a company of Chinese people who arrived, they settled in the same houses near me. They were busy until late in their “cells”, they were discussing something there, talking loudly.

The day was stressful, everything was running and running, even I didn’t really take a photo and around midnight I got tired, I set an alarm for 6 hours and went to bed.

To display the Table correctly, rotate the smartphone horizontally 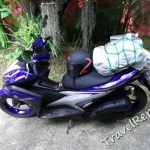 Top
We use cookies to best represent our site. By continuing to use this site, you agree to the use of cookies.
To accept
More details…