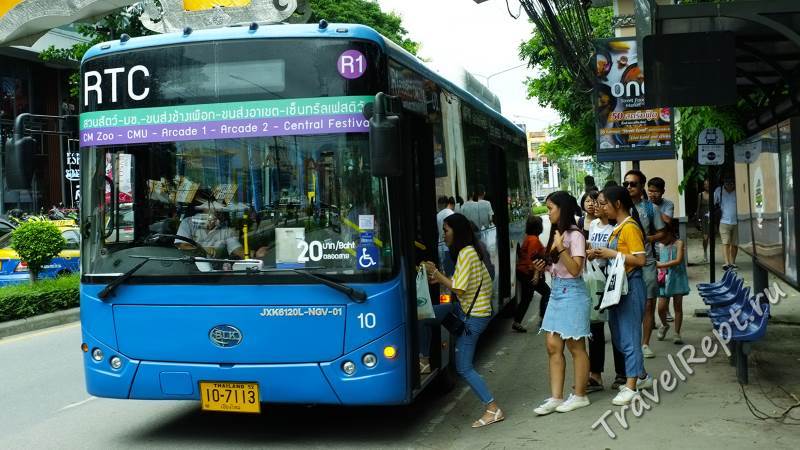 The bus network in the city of Chiang Mai is very developed, so you should use it instead of spending money on a taxi, tuk-tuk, on a bike or car rental. Moreover, if you do not drive auto-moto transport, then Chiang Mai buses are the most optimal form of transport within the city that will take you to all the main attractions of Chiang Mai. There is very little information about this type of transport, so on my first trip to Chiang Mai, I spent 150 ฿ from the airport by taxi and 200 ฿ to the airport in tuk-tuk.

The fare on Chiang Mai buses is 15 – 20 ฿, depending on the route. There are discounts for students and monks. Chiang Mai buses are very comfortable, equipped with air conditioning, free Wi-Fi without registration, places for the disabled and bike racks. Some bus routes run through the airport, so getting to the city is easy. Schedule from 6 am to 10 pm, the average interval is 30 minutes. 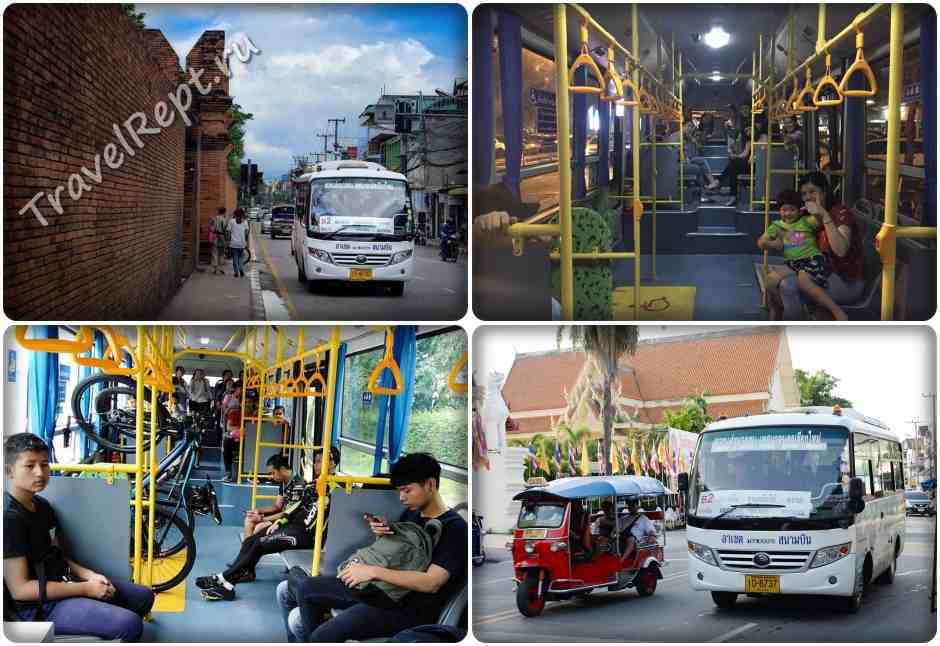 Buses stop only at marked bus stops located, on average, 500 meters from each other. Bus stops in busy places can have canopies and seating, but more often it’s just a stop sign on a pillar. Chiang Mai buses do not stop automatically at every stop. When you see an approaching bus, you need to give a sign with your hand to stop the bus. Boarding the bus is done at the front door next to the driver. Also, when you are on the bus you need to ask the driver to stop at the bus stop. 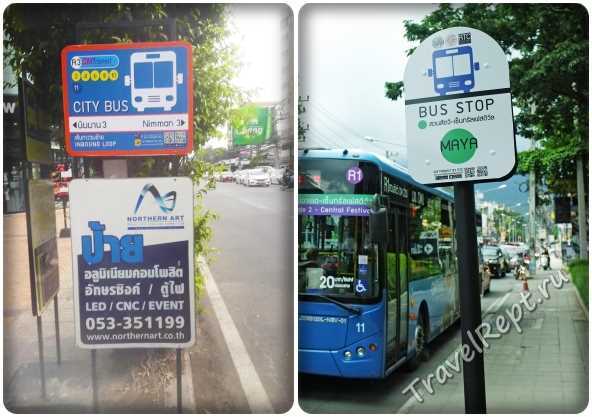 You can pay for the trip in cash or with a special payment card.

If you pay in cash, then the fare must be paid to the machine, which accepts only coins. Therefore, prepare 10 ฿ coins with you. You can also change coins with the driver.

If you are in Chiang Mai for a long time and plan to travel by bus often, then it is more convenient to use a Rabbit payment card. The Rabbit card is a rechargeable contactless smart card used in Thailand for electronic payments in various systems: BTS Skytrain, Bangkok BRT and others. There is also a special tourist card – RTC Tourist. There are two types:

You can buy Rabbit and RTC Tourist cards at RTC racks located at Chiang Mai International Airport (exit No. 1), in the shopping centers of the Central Festival Chiang Mai and Promenada Chiang Mai centers. You can also buy these cards directly from the bus driver (but they quickly end). 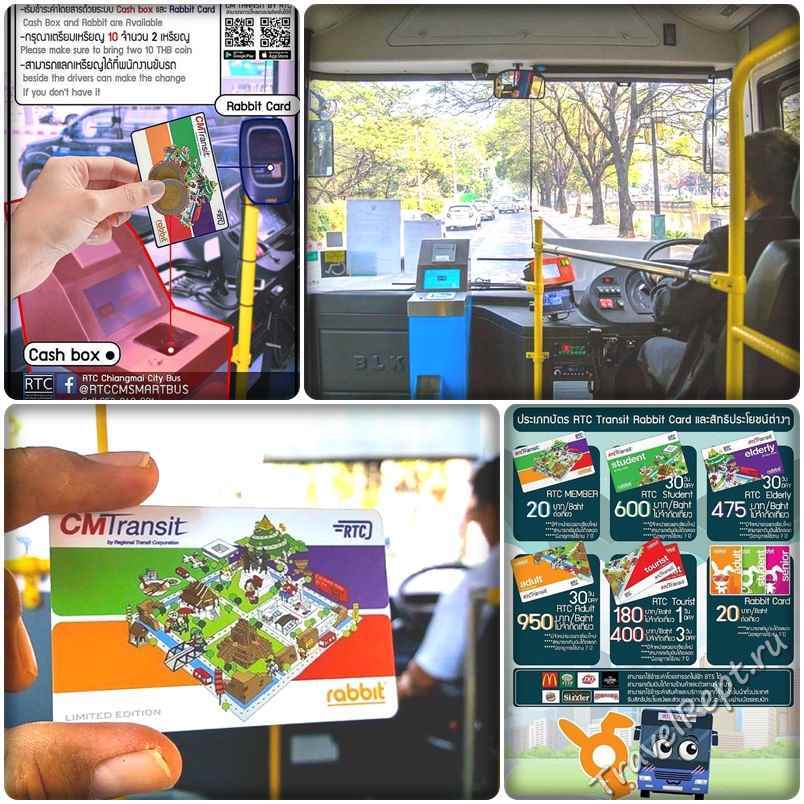 A distinctive feature of Chiang Mai buses are the CM TRANSIT and VIABUS mobile applications. These applications show you a map of routes and stops (using Google Map), allow you to track the location of buses in real time. Applications are free, available on Google Play and the App Store, do not require registration and work with the Internet and the location function turned on.

In October 2019, I took screenshots from the VIABUS app when I got to the airport in Chiang Mai. 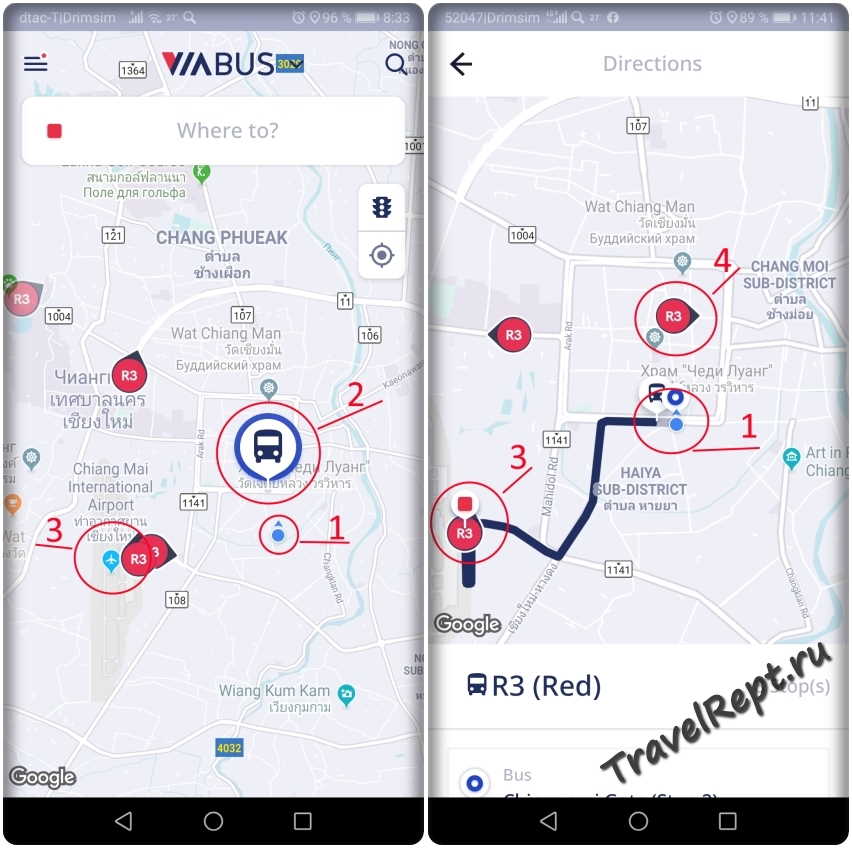 Here in the figure is indicated by numbers:

Chiang Mai is a city of ancient buildings, the streets are very narrow and there are a lot of one-way roads, bus traffic has a number of characteristic features. For example, some routes have their own “mirror doubles” that move around the city either clockwise or counterclockwise. 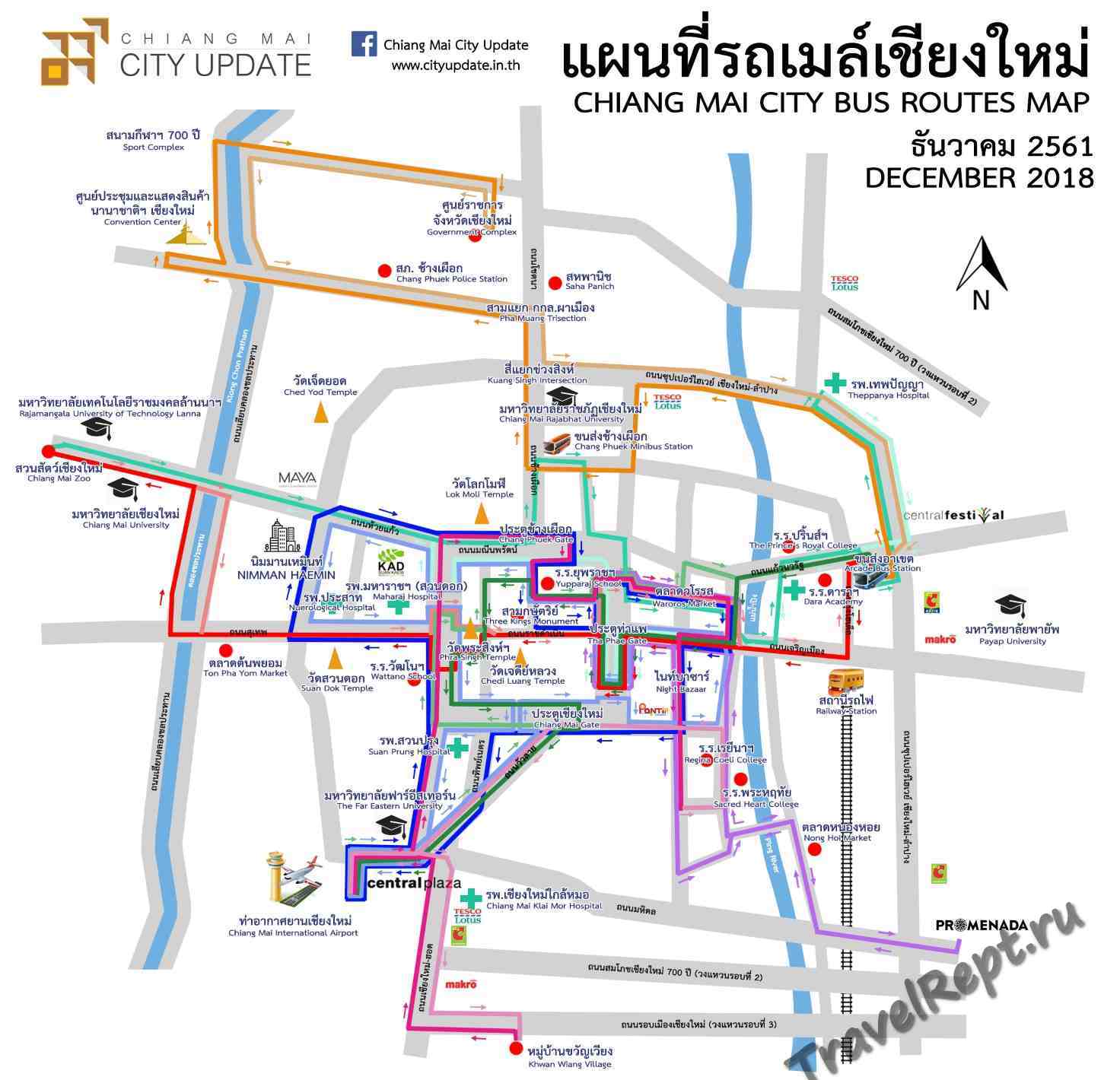 For a detailed study of the routes on the map, you can disable and enable stops and routes by setting and unmarking.

At first, it may seem that Chiang Mai’s buses are an intricate network that we can’t figure out. But actually it’s not very difficult. We’ll figure out. To start:

Big buses are big RTC buses. Serve passengers from 6 am until late (the latest until 23:30). They have: air conditioning, WiFi, places for wheelchairs, bike racks. The fare is 20 ฿. They accept cash (10 ฿ coins) and RTC Tourist and Rabbit cards. The interval of movement is 20 to 30 minutes. 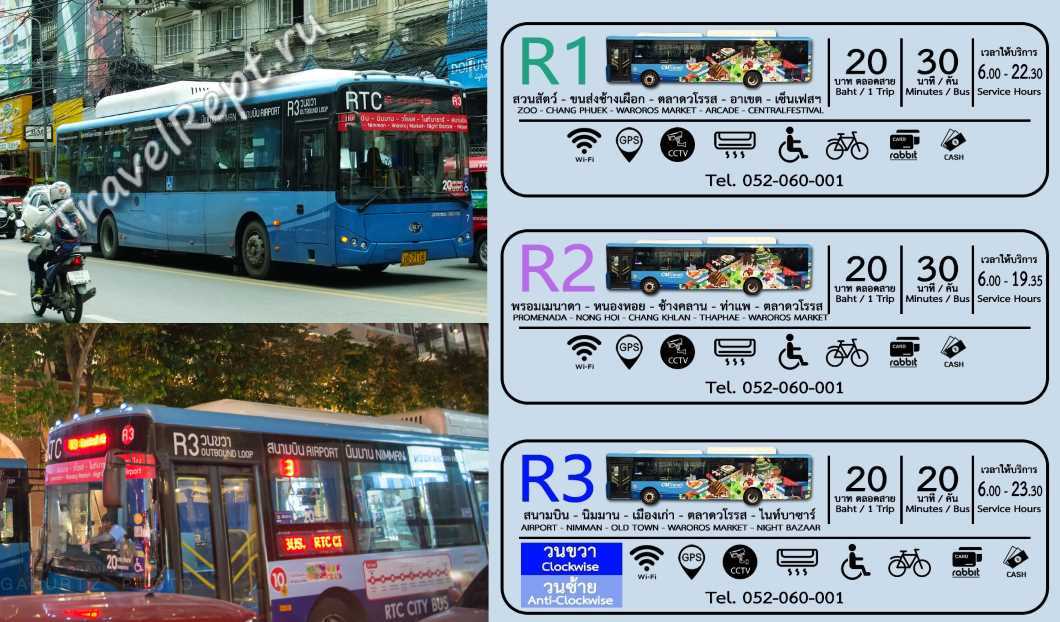 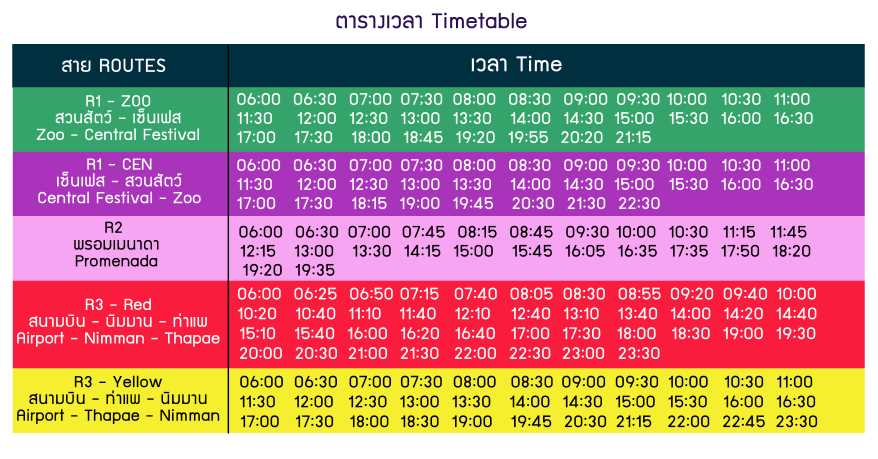 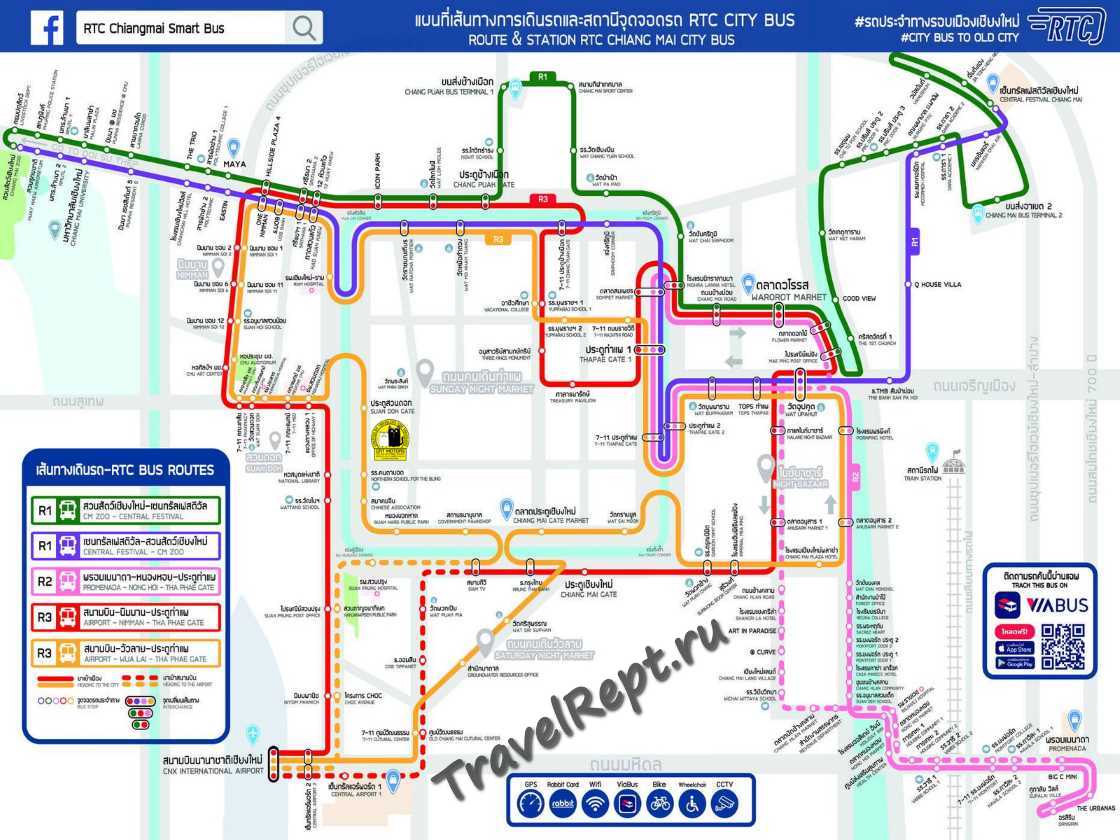 With R1 and R2, everything is clear. And with R3, things are as follows:

The dotted line indicates the path to the airport.

These are small buses. Traditionally white, but later on the sides began to put color advertising. Serve passengers from 6 am to 6 pm. Of the amenities only air conditioning. But the fare is 15 ฿. They accept cash only. The interval of motion is about an hour. 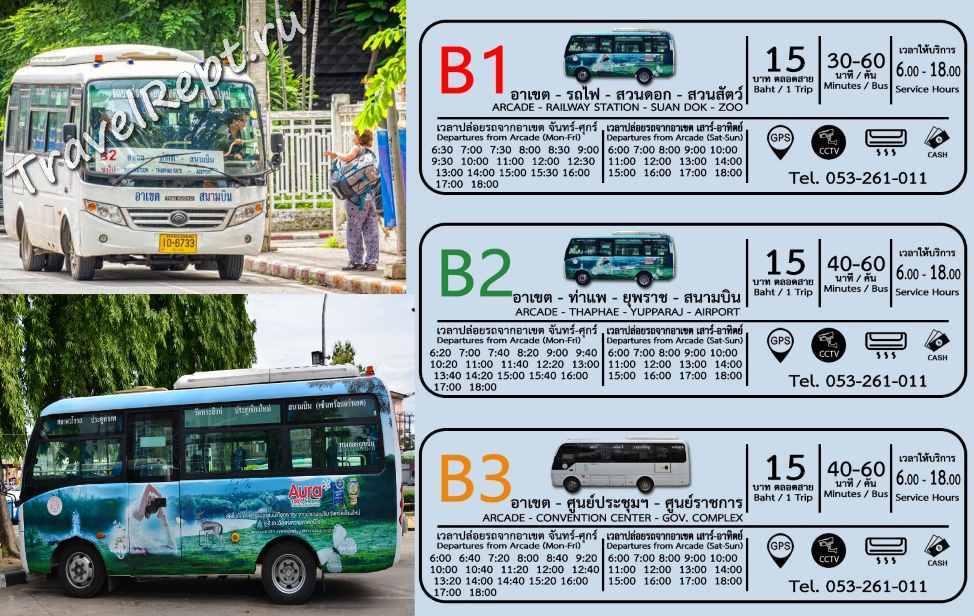 This is also a small bus. It is painted pink. Serves passengers from 6 am to 19 pm. Of the amenities only air conditioning. The fare is 20 ฿. They accept cash only. The interval of movement is 35 minutes.

As you can see, Chiang Mai buses are a fairly modern form of transport. Using them is convenient and profitable. For example, 4 routes go from and to the airport and it costs only 15 – 20 ฿.

I hope that the information will be useful for travelers to move around Chiang Mai and will save time and money.

Top
We use cookies to best represent our site. By continuing to use this site, you agree to the use of cookies.
To accept
More details…